Sonic Effects of the Solar Eclipse

What are we doing?

Purdue University’s Discovery Park Center for Global Soundscapes is embarking on a huge, continental scale project aimed to understand how animals will respond to the solar eclipse that will be occurring across much of the United States and Canada on Monday, August 21, 2017. Acoustic sensors recording from Alaska to Puerto Rico will collect audio data to help scientists to understand how an important cue like the sun affects the acoustic behavior animals like birds, crickets, cicadas, and frogs. Science museum educators, state park managers, national park scientists, and zoo personnel from across the continents are assisting to collect acoustic recordings and observations of sonic changes. A citizen science app called Record the Earth will allow anyone to record the sounds before, during, and after the eclipse. Data from scientists and citizen scientists are being sent to the Purdue center for analysis.

This web site provides background information for people interested in helping or learning about this rare study.

Are the changes in the circadian cycles different in coniferous forests, temperate deciduous forests, grasslands, and coastal ecosystems?

Are any changes in sound production gradual or do they occur sharply? Are there any strange sounds being produced by animals?

Why is this important?

Studies like this one help scientists to understand how nature works, but more specifically, they can reveal what might trigger unexpected behaviors. Scientists are now observing that many birds are singing at night in urban environments because it is too noisy for them to successfully communicate during the day. How does a natural cause like an eclipse cause different behavioral changes than an unnatural cause like urban noise? Understanding how natural events and human activities affect organisms is vitally important as over 50% of all the planet’s species could potentially become extinct in the next century if we don’t gain a full understanding of the triggers of animal behavior.

How can you help? 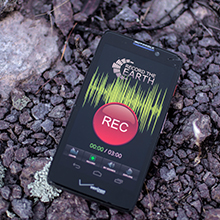 Download our app, and record soundscapes before, during, and after the eclipse. Listen carefully to your recordings, and note observations in the comments field. The app can be downloaded at www.recordtheearth.org. Learn more about soundscapes and the research being conducted at Purdue at centerforglobalsoundscapes.org. You can also see the trailer of our new giant screen, interactive film, Global Soundscapes! A Mission to Record the Earth, now showing in theaters around North America. If you are a project partner with a Wildlife Acoustics Song Meter SM4 sensor, click here for detailed instructions on how to program and deploy your sensor

If you have questions and concerns, please contact personnel from the Center for Global Soundscapes in the following order: